Tickets now on sale through brownpapertickets.com.

On December 26th, the beloved Seattle Repertory Jazz Orchestra returns with its annual concert of Sacred Music by Duke Ellington. For the first time, vocalist Everett Greene, a renowned Emmy Award winning vocalist currently recording and touring with the Count Basie Orchestra, joins the SRJO and its co-directors alto saxophonist Michael Brockman, an Ellington scholar and professor of music at the University of Washington, and drummer Clarence Acox, the award-winning director of Garfield High School’s nationally-ranked jazz program. Returning for this year’s concert is vocalist Nichol Venee Eskridge (who is also featured on the SRJO’s Sacred Music of Duke Ellington CD), tap-dancer Alex Dugdale, and the Northwest Chamber Chorus under Director Mark Kloepper.

As always, the SRJO aims to recapture the spirit of Ellington’s original Sacred Music that debuted on September 16, 1965 at the Grace Cathedral in San Francisco. It was at the conclusion of this landmark concert that Ellington proclaimed, “I’m sure this is the most important statement we’ve ever made.” Ellington considered the Sacred Concert to be amongst his most significant accomplishments and devoted the last years of his life to performing the programs hundreds of times throughout the world.
END_OF_DOCUMENT_TOKEN_TO_BE_REPLACED

This weekend on Jazz Northwest A recent concert by the Susan Pascal Quartet at the Seattle Art Museum will air on Jazz Northwest Sunday, December 20 at 1 PM Pacific Time on 88.5, KPLU. This month, the Susan Pascal Quartet is revisiting the music of The Modern Jazz Quartet, one of the most long-lived jazz groups which played concerts all over the world for more than 40 years with the same personnel.

Susan Pascal transcribed a selection of music recorded by the MJQ for her quartet and the instrumentation is identical: vibraharp (Susan Pascal), piano (Bill Anschell), string bass (Chuck Deardorf) and drums (Matt Jorgensen). The music includes several seasonal pieces including one original arrangement by Bill Anschell.

Originally the rhythm section of the Dizzy Gillespie Big Band in the 40s, the Modern Jazz Quartet recorded and toured extensively and was one of the most successful and popular groups in the history of jazz. The delicate, crystalline music they played had overtones of classical music and their audiences listened with the same rapt attention given to a classical string quartet. However, there was a strong rhythmic pulse and a blues-based core in addition to contrapuntal interplay. Pianist John Lewis and vibist Milt Jackson composed most of the music played by the quartet whose other members were Percy Heath, bass and Connie Kay, drums.

The Art of Jazz Series at the Seattle Art Museum is produced by Earshot Jazz, John Gilbreath Executive Director, and presented on the second Thursday of each month. The next concert on January 14 will feature the Hadley Caliman Quintet.

Jazz Northwest is recorded and produced by Jim Wilke exclusively for 88.5 KPLU and kplu.org. A podcast of the program will be available at kplu.org after the airdate.

Listen to an audio sample below. 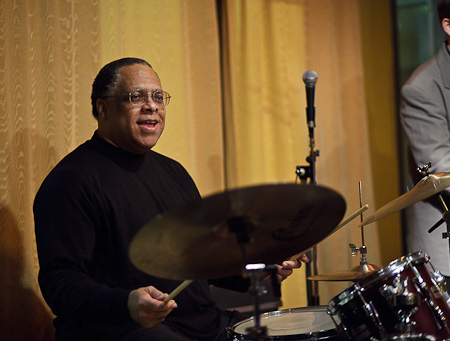 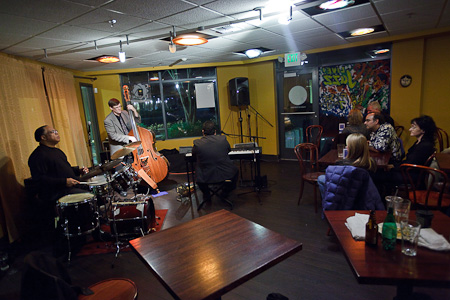 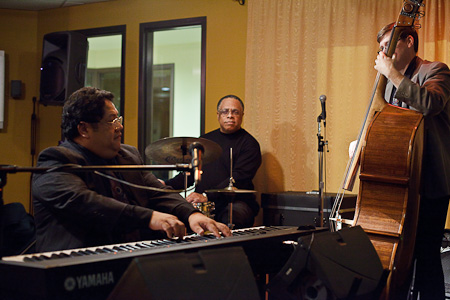 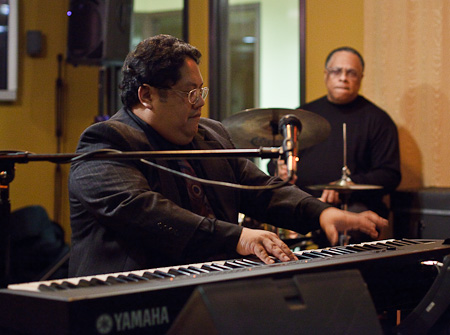 Are you ready for the Holidays?

Make sure the volume is up to get the full effect … 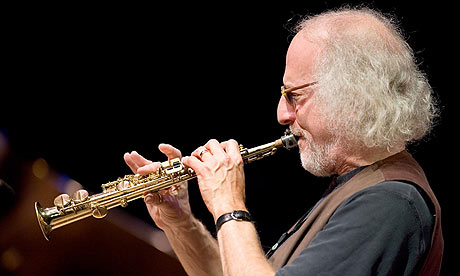 Jazzman Larry Ochs has seen many things during 40 years playing his saxophone around the world but, until this week, nobody had ever called the police on him.

That changed on Monday night however, when’s Spain’s pistol-carrying Civil Guard police force descended on the Sigüenza Jazz festival to investigate allegations that Ochs’s music was not, well, jazz.

Police decided to investigate after an angry jazz buff complained that the Larry Ochs Sax and Drumming Core group was on the wrong side of a line dividing jazz from contemporary music.

The jazz purist claimed his doctor had warned it was “psychologically inadvisable” for him to listen to anything that could be mistaken for mere contemporary music.

According to a report in El País newspaper yesterday, the khaki-clad police officers listened to the saxophone-playing and drumming coming from the festival stage before agreeing that the purist might, indeed, have a case.

Continue reading at The Guardian.

After being signed to a major-label record deal at age 23, jazz pianist Travis Shook took some career detours.

But the winding road is leading uphill these days. This weekend, it’s brings the award-winning musician back to his boyhood home in Olympia. His concert Saturday – with drummer Matt Jorgensen and bassist Phil Sparks, both of Seattle – is his first time playing here in seven years.

A California native who moved to Olympia at age 10, Shook played piano from the time he was 5, but it was at Olympia High School that he was first exposed to jazz.

“I joined the jazz band at the age of 16,” said Shook, whose mother, Belva Shook, still lives in Olympia. “I’d always taken classical lessons but did not really want to become a classical musician.

“When I started playing jazz, I said, ‘Oh, well, this is actually perfect.’ I pulled out a Duke Ellington album we had at home. I’d never heard it; it was still in the plastic.

“There was no question about what I wanted to do after that.”

What captured his attention was the energy of jazz.

“Jazz is composing on the spur of the moment,” Shook said. “There’s something magical that happens. Say there are four of us playing at once; we’re all listening to what the others are playing but we’re all saying what we want to say at the same time.

Continue reading at The Olympian.

The concept behind the vocal jazz group Cocoa Martini seems both familiar and novel, three women who sing songs that most of us know well, backed by a quartet.

When performing, the three singers, who straddle age 50, dress in elegant, evening dresses and take turns singing most of the songs, harmonizing on about a third of them, taking care in between to joke, address the audience and talk about their experience with the music.

Familiar, because the formula is tried and true and the songs easy to connect with. Novel, because it seems jazz is seldom presented this way anymore.

The members of Cocoa Martini, who will perform Sunday night at 7 at the Triple Door for the third time in three years, admit to tapping into a nostalgia for the kind of songs they sing and the way they sing them. 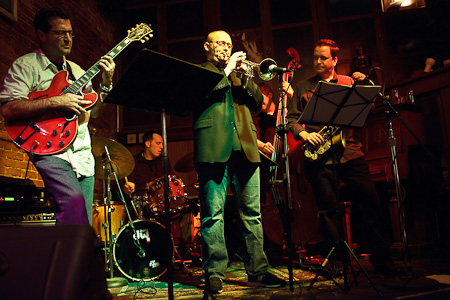 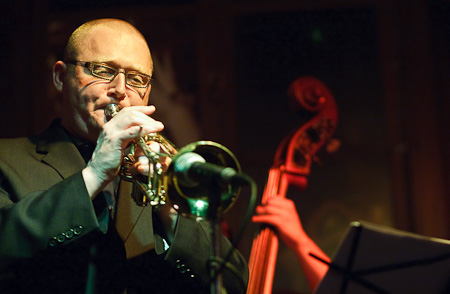 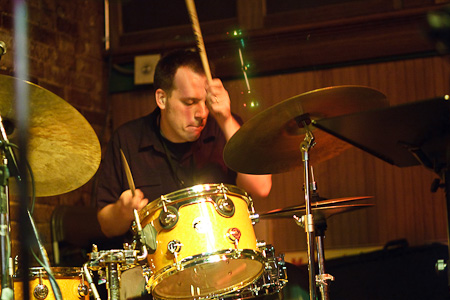 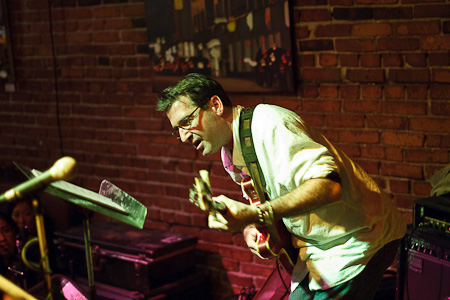 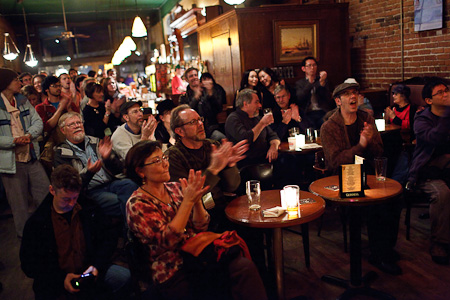