SEATTLE DRUM SCHOOL: Cornish Jazz Composers Ensemble
from Earshot Jazz: Just about every jazz composer in Seattle has studied with, or worked with someone who has studied with, or lead bands with somebody who has studied with Jim Knapp. Knapp developed the revered jazz program at Cornish that releases bright doe-eyed young musicians into local clubs every year, and his signature chord structures and distinct harmonies are emulated throughout the Puget Sound. Tonight, Knapp brings his newest batch of young Monks, Minguses, and Ellingtons to the Seattle Drum School (North Seattle) to present their works. Featured performers include Courtney Cutchins, Clark Gibson, Gabriel Burbano, Jacob Stickney, Dick Valentine, Evan McPherson, Joshua Halbert and Joe Mascorella. Seattle Drum School (12510 15th Ave NE), 8:00 pm: $10.

As much a civic exercise as musical event, the Ballard Jazz Walk commences Thursday night on the streets of downtown Ballard, less than two weeks after the end of the city’s largest and longest jazz festival, Earshot.

If the timing seems curious, it might be helpful to remember that way back in the history of the event — as in five years ago — the jazz walk was part of the Earshot event and known as the Ballard Jazz Festival. Organizers presold only 28 tickets and waited anxiously, wondering if anyone would show up.

To their relief all the shows sold out. Five years later, the Ballard Jazz Walk has become its own event — the Ballard Jazz Festival was spun off into a five-day event in April — growing from five venues to 11, from five performers to 15. And it operates on its own without the aid of Earshot or the Ballard Chamber of Commerce, which initially helped sponsor the event.

The jazz walk is both a complement and antidote to Earshot. If the latter is a fine wine sipped slowly, the jazz walk is a raucous cocktail downed in a gulp. The local businesses welcome and try to capitalize on the increased foot traffic in a neighborhood already known for it.

“This could only happen in Ballard,” said co-artistic director and drummer Matt Jorgensen of the density of bars and restaurants. “It just works here.”

Already, the festival is routinely mentioned in the marketing materials of the many condominiums sprouting around Market Street.

Musicians (some of whom were also on the Earshot lineup) will play all night in pubs, lounges, record stores, even a furniture store and a Thai restaurant, all within walking distance of one another. One ticket covers admission to all shows, a mix of traditional and modern. Most of the artists live in the region, making the jazz walk a distinctly local event. Jorgensen admitted that can be a double-edged sword.

“Being a local musician can have a negative connotation,” he said, “like you’re somehow not as good. A lot of us play all over the country. We just happen to live here.”

From which comes the strength of the schedule. Many of the area’s top musicians will lead their own groups and share the stage with one another: Hadley Caliman, Greta Matassa, Jay Thomas, Mark Taylor, Thomas Marriott, Cuong Vu, Wayne Horvitz, John Hansen and Phil Sparks among others.

The jazz walk is in part a marketing tool, along with the spring jazz festival, of the independent jazz label Origin Records, started by Jorgensen and his former drum teacher John Bishop (both are also performing in the jazz walk) in the Ballard apartment building they both used to live in. Origin endeavors to do for jazz what Sub Pop did for rock in the 1980s and ’90s, cultivating local talent for universal consumption.

Seattle Times: Kat Parra, a voice with personality and soul

But Parra isn’t content with tried-and-true formulas. Since the release of her impressive 2006 debut “Birds In Flight,” the Oakland-based singer has created an ambitious repertoire based on a treasure trove of Ladino songs written when Sephardic Jews lived in Muslim-dominated Spain more than five centuries ago. The rhythmically expansive arrangements give a whole new meaning to Latin jazz.

“When I started digging deeper into the Golden Age of Spain, when Jews and Muslims lived closely together and shared innovations, I was blown away and fascinated by the period,” says Parra, who performs Friday and Saturday at Bake’s Place as part of the Visiting Songbirds Series; she brings her superlative working band featuring bassist Peter Barshay, drummer Paul van Wageningen and pianist Murray Low, who’s responsible for many of the charts.
END_OF_DOCUMENT_TOKEN_TO_BE_REPLACED

PORTLAND — Authorities say Mitch Mitchell, drummer for the legendary Jimi Hendrix Experience of the 1960s, has been found dead in his Portland hotel room.

Erin Patrick, a deputy medical examiner in Multnomah County, says Mitchell was found dead a little after 3 a.m. today in his room at the Benson Hotel in downtown Portland.

She says Mitchell apparently died of natural causes at 62. An autopsy is planned.

Mitchell was touring with the Experience Hendrix Tour, which performed Friday at the Arlene Schnitzer Concert Hall in Portland. It was the last stop on the West Coast portion of the tour.

Bruce Forman at Cornish this Sunday

Triple Door Mainstage, 8pm
Toumani Diabate
Performing solo on the kora, a West African 21-string harp, the Malian is among the most renowned, imaginative instrumentalists alive.

Jack Wilkins
The New York guitarist’s dazzling technique and unique harmonic approach have led him to collaborations with Chet Baker, Sarah Vaughan, Bob Brookmeyer, Buddy Rich
and many others.

We have a wonderful series on Seattle Jazz Scene called “Leading Questions” by drummer and photographer Steve Korn.

They are always available on the right-side navigation, but just in case you’ve missed it here are the available interviews:

This Sunday on Jazz NW

It was a dream concert! NEA Jazz Master James Moody was saxophone soloist with The Seattle Repertory Jazz Orchestra which includes many of Seattle’s top jazz players, co-led by Clarence Acox and Michael Brockman. Moody was in brilliant form as always, pouring forth brilliant inspired solos as he has since he first drew attention when he joined Dizzy Gillespie’s big band in 1946 as they were ushering in the Bop era. Diz and Moody were life-long friends and musical compatriots, and Moody still performs with the Dizzy Gillespie All-Stars and alumni bands.

We recorded Moody and the SRJO before a cheering capacity audience at the Kirkland Performance Center and we’re pleased to have the opportunity to present excerpts from this unique concert on Jazz Northwest on Sunday, November 9 on 88-5, KPLU.

Jazz Northwest is recorded and produced by Jim Wilke exclusively for KPLU. It airs every Sunday at 1:00pm on KPLU 88.5fm and online at www.kplu.org.

Listen to an audio preview below …

What a week! We are going to decompress by going to hear some live jazz tonight.

all the other stuff …

Someone once told me, “Nobody cares about your creativity or your original music”. Wrong.

When I was 14, I discovered Bird, Cannonball, and Phil Woods.

The saxophone is my voice.

If I could do it all over again, I’d be better at trusting my initial instincts more and just getting on with it!

Practice makes no difference at all if you have no plan or goal.

When I look at where I’m at right now, I’m proud of the projects I’ve been a part of and grateful to the musicians who include me.

Some of my best ideas come to me when I’m not trying to come up with an idea.

My parents were and are, always completely supportive. I’m very lucky.

Motivation is best when it’s internally based.

As I get older, I’ve realized that if you try to please everyone, you’re not being sincere. That, and I’m not nearly as old as some of you other guys.

In the big scheme of things, what really matters is are you happy? Do you love what you do? Do you care about the people around you?

Music has taught me friendship, trust, confidence, humility, compromise … pretty much everything.

People ask me “why does your neck expand so much when you play” (I have no idea).
END_OF_DOCUMENT_TOKEN_TO_BE_REPLACED 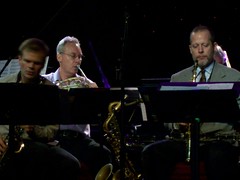