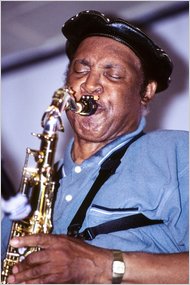 Fred Anderson, a tenor saxophonist who tied the bebop innovations of Charlie Parker to the explorations of later avant-garde musicians and who owned the Velvet Lounge, a South Side Chicago club known for fostering the careers of emerging players, died on Thursday. He was 81.
…
In 1982 Mr. Anderson, who was earning a living with odd jobs, including bartending, took over a workingman’s bar at 2128 1/2 South Indiana in Chicago and slowly began to transform it. At first he opened it on alternating Sunday nights for jam sessions for local musicians; eventually he turned it into a full-time music room where he led his own bands and booked others, especially experimental players who attracted the most serious of serious jazz aficionados.

He named it the Velvet Lounge after an audience member complimented him, possibly inaccurately, on his smooth and velvet sound. Particularly since the early 1990s, when he began charging a cover, many prominent musicians — including the flutist Nicole Mitchell and the saxophonist Ken Vandermark — have had their careers nurtured there.

“People don’t come to the Velvet to hang out,” Mr. Anderson said in an interview with NPR in 2005. “They come to listen to music. It’s a happy place to play.”