Whether intentional or not, the organizers of the 2010 Bellevue Jazz Festival could not have picked a more appropriate headline act than trumpeter Terence Blanchard. His career represents all the aspirations of the three-year-old festival, to be commercially successful, critically respected, and to be involved and invested in its community’s culture and education.

Blanchard, who performs Saturday at 8 p.m. in the Theatre at Meydenbauer Center, is 48 years old, a composer, arranger, band leader, and teacher. A native of New Orleans, he grew up in the same circles as the Marsalis family. Wynton Marsalis was the one who recommend that Blanchard replace him as a member of Art Blakey and the Jazz Messengers, considered then to be the ultimate finishing school for jazz music’s most promising talent.

He moved to New York and lived in Brooklyn’s Fort Greene neighborhood, considered then to be the African-American SoHo, with neighbors like the film director Spike Lee, who asked Blanchard to play trumpet for some of his films like “Mo’ Better Blues,” about a jazz trumpet player. That led to Blanchard writing the score for “Jungle Fever,” and his lucrative career composing music for films took off.

Of course, Blanchard continued to perform and record his own albums, riding a graceful line between hard bop and more traditional standards. He earned his reputation as a serious composer with his Grammy Award-winning album, “A Tale of God’s Will (A Requiem for Katrina),” his musical reflections and interpretation of the aftermath of Hurricane Katrina.

Going a step further, as artistic director of the Thelonius Monk Institute of Jazz, he persuaded leadership to relocate the school from Los Angeles to his hometown of New Orleans, doing his part to restore the rich artistic tapestry of his city.
END_OF_DOCUMENT_TOKEN_TO_BE_REPLACED

Art Blakey Tribute at The New Orleans – Sunday, May 30

The New Orleans Creole Restaurant will play host to a living retrospective of the music of Art Blakey and his famed band The Jazz Messengers. The all-star band of local heavyweights features brothers Thomas & David Marriott on trumpet and trombone, Matt Jorgensen on drums, pianist Bill Anschell and bassist Phil Sparks. Beginning at 8:00 pm, the ensemble will play music from the Jazz Messengers’ 50-year history.

Drummer Art Blakey was at the forefront of the bebop movement of the 1940’s and ‘50’s in New York. The Jazz Messengers, first formed by Blakey in 1947, quickly became a proving ground for most of the major names in jazz in the last 50 years. Keith Jarrett, Wynton & Branford Marsalis, Horace Silver, Kevin Eubanks (of the Tonight Show), Kenny Garrett, Freddie Hubbard, Wayne Shorter and scores of other influential musicians were members of The Jazz Messengers at one time or another and gained from Blakey’s tutelage. Blakey, also known as Abdullah Ibn Buhaina after his conversion to Islam in the late 1940’s, recorded over 130 albums as a leader in his lengthy career as a bandleader and drummer.

This one-time event will take place on Sunday, May 30th at the New Orleans Creole Restaurant in Pioneer Square, an all ages venue featuring a full bar and authentic Creole cuisine. The music begins at 8:00 pm. Admission is $10.00 and reservations are strongly recommended as seating is limited. There will be a second seating on a first-come-first-served basis at 9:30 pm. For reservations, call (206) 622-2563.

The New Orleans is located at 114 First Avenue South.

Rochelle House sings her style of “Cold Jazz” on Jazz Northwest at 1 PM PDT on Sunday, May 30 on 88.5, KPLU. She leads an unusual ensemble including African percussionist Thion Diop, with Andy Cole, guitar, Geoff Harper, bass and Teo Shantz on drumset in a wide ranging program from standards to Coltrane, Cat Stevens and her own songs. She has recorded two CDs, “Dreams of Love” and “Water”. For more about Rochelle House, see http://www.rochellehouse.net/site/

The concert was recorded at The Seattle Art Museum on May 13, 2010 as part of the Art Of Jazz series presented by Earshot on the second Thursday of each month, with the support of The Weekly and 88.5 KPLU. Jazz Northwest is recorded and produced by Jim Wilke exclusively for KPLU and kplu.org. The program is also available as a podcast after the airdate.

A Big Weekend of Music

Folklife Festival is this weekend. In addition there is a lot of great jazz music which will hopefully keep the rain away.

Thomas Marriott will be in residency at The New Orleans performing tonight with his quartet and on Sunday night with a Tribute to Art Blakey (this show is filling up fast so call 206-622-2563 to make a reservation).

Doug Miller Farewell at The New Orleans next Tuesday

As most of you probably know, Doug Miller is moving to California in a couple of weeks. I thought it would be nice for him to have a chance to say goodbye to all the musicians he’s befriended over the years, so we’re having a very informal get-together at the New Orleans next Tuesday, June 1st. We’ll be in the bar section so we can make noise. Drop by if you can, have a drink, eat some cake, and bid Doug a fond farewell.

Please let me know if you think you’ll be able to make it. Gaye would like a rough idea of how many people to expect.

Thanks — hope to see you there.

In case you missed it …

Catching up on some recent stories … remember, sign up for our Email List to receive updates from Seattle Jazz Scene.

Art Blakey Tribute at The New Orleans – Sunday, May 30

And don’t miss our new series, Catching Up With …
– Greta Matassa
– Chad McCullough
(more to come …)

Catching up with Chad McCullough

Trumpter Chad McCullough has had a busy 2010 and things haven’t been letting up.

After a January spent performing in Europe under his own name, touring and recording earlier this year with Andrew Oliver’s Kora Band, McCullough is currently on an 14 city tour across Canada and the western U.S. with the international cooperative group Tunnel Six featuring Ben Dietschi, saxophones (Toronto, ON); Andrew Oliver, piano (Portland, OR); Brian Seligman, guitar (Toronto, ON); Ron Hynes, bass (Halifax, NS) and Tyson Stubelek, drums (New York City, NY). The group formed last year when McCullough and company were at the Banff Center for the Arts.

Speaking from a stop in Brandon, Manitoba, McCullough said, “This tour has allowed us to develop our sound, build on the existing chemistry, and take this music to a deeper level then any project I’ve ever been apart of.”

Tunnel Six performs in Seattle next Monday, May 31st at Tula’s Jazz Club. A complete tour schedule can be found here.

On the recording front, McCullough recorded a new CD with Slovakian pianist Michal Vanoucek, Mark Taylor, Matt Jorgensen and Dave Captein earlier this year and will enter the studio in June for a new project with with Belgian pianist Bram Weijters, accompanied by John Bishop and Chuck Deardorf.

“I’m pretty excited by all of the artistically rewarding things going on right now. This [Tunnel Six] tour has been amazing. I’ll be going to the JazzWeek conference in Rochester with Origin Records and doing a West Coast tour with Portland-based pianist Ben Darwish in support of his new record. I’m just really humbled by all of the great experiences that I get to be apart of. I can’t think of anything I’d rather be doing right now!”

We’ve started a new email list for SeattleJazzScene.com. Please take a moment to sign-up (you’ll see the little box on the right navigation) and you’ll receive updates on improvements to seattlejazzscene.com, special event notifications and more!

This is part of our Spring Improvement Drive on seattlejazzscene.com … stay tuned for more!

The Bellevue Jazz Festival starts on June 3rd … make sure and check out their website and plan for a great weekend of music.

We will have complete coverage in the coming week and during the festival so stay tuned! 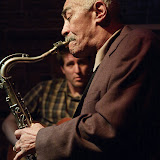 JazzWeek, the the definitive national jazz radio airplay charting organization, has released their nominees for their 2010 JazzWeek Awards and a number of Northwest organizations are represented.

For the third year in a row Origin Records was nominated for Record Label of the Year along with Concord Records, HighNote/Savant, Mack Avenue, Posi-Tone and Resonance Records.

Spokane radio station KEWU picked up two nominations. The station was nominated for Station of the Year and their Program Director, Elizabeth Farriss, received a nomination for Programmer of the Year.

Awards will be announced during the JazzWeek Summit 2010 in Rochester, NY, June 17-19.

Riley Mulherkar, pictured here playing Flugenhorn, will be heading to Julliard next year.

The same day Riley Mulherkar competed in the Essentially Ellington jazz competition with the rest of the Garfield High School jazz band, he also auditioned for entrance into the jazz studies program at The Juilliard School.

According to Mulherkar, five minutes after the audition, Carl Allen, the artistic director of the jazz department, told Mulherkar, “I know you have a performance tonight and I hope this news doesn’t dampen your playing, but I’m sorry to have to tell you that you’ve been accepted to Juilliard.”

He started the day by performing with the band before judges at Essentially Ellington. Garfield was announced as one of the top three bands. He then went next door to Juilliard to audition. After a 20-minute interview, and the 20-minute audition, he was told he got in. That’s not the way it usually happens, but Juilliard put in a rush order because a few spots unexpectedly opened up during the admission process. Mulherkar had been accepted to the New England Conservatory of Music, and had all but decided to go when Juilliard called.

After the audition, he played the evening concert at Alice Tully Hall, soloing with Wynton Marsalis, before Garfield was announced the winner of Essentially Ellington for the fourth time overall and the second time in a row. To top it off, Mulherkar was named the winner of the Ella Fitzgerald award for outstanding soloist.

“It was a huge day,” said Mulherkar, who got a partial scholarship to attend Juilliard. “I saw the Juilliard students play together at Essentially Ellington (at Dizzy’s club). I like the idea of being close to Lincoln Center.”

He will join friend Andy Clausen (the Roosevelt High trombonist who also competed at Ellington), who received a scholarship to attend Juilliard. Garfield alum Tatum Greenblatt got his master’s at Juilliard. He lives in New York and occasionally plays with the Jazz at Lincoln Center Orchestra.

Mulherkar is not the only musician from Garfield’s winning band who will study jazz in college. Alto saxophonist Evan Shay will attend Montreal’s McGill University on scholarship; Bassist Carmen Rothwell is enrolling in the University of Washington’s jazz studies program; and drummer James Squires has been accepted to Berklee although he has not yet announced a decision.

We were so excited about this one that we accidentally listed it a week early
…but it’s NEXT Sunday, May 30th:
NEW ORLEANS: Art Blakey Tribute w/ Thomas Marriott (trumpet), David Marriott (trombone), Matt Jorgensen (drums), Bill Anschell (piano), Phil Sparks (bass), 8pm