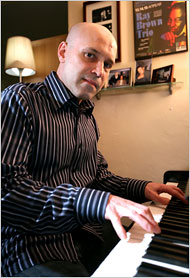 from the Sunday New York Times:

Mr. Fuller, a trim man with a shaved head whose stubby fingers fly deftly over the keyboard, smiled graciously. A needy ego is of no use to a sideman, who makes a living in another artist’s shadow and gets only parenthetical billing, usually with his instrument appended to his name (“Larry Fuller on piano”). But it is always nice to know that people are tuning in to him, Mr. Fuller said, as it reaffirms his core belief that “you can never underestimate what people hear even if you are just backing somebody up.”

The quiet history of jazz sidemen is long and storied, and Mr. Fuller, at 43, has already earned a place there. He started his career as a baby-faced accompanist for the veteran jazz singer Ernestine Anderson and reached a personal peak in the final trio of the great bassist Ray Brown. Like many a sideman with considerable talent, Mr. Fuller, who also composes and arranges, worries about maintaining his musical identity and aspires to lead his own trio someday. But for now, he said, especially after a difficult period in his personal life, it is enough to “serve the music” that he has revered since he was 13, when a colorful saxophonist named Candy Johnson took him under wing in Toledo, Ohio.

To make a steady living as a jazz musician is in itself no mean feat, and Mr. Fuller has done so his whole life. His experience offers some insight into the requirements for survival as a working artist, especially in a specialty like jazz where fame and fortune are not realistic goals. Talent most certainly helps, but single-mindedness, passion, humility and the ability to live modestly seem critical too. For Mr. Fuller his upbringing in a blue-collar neighborhood in Toledo, where his father supported five kids by toiling on the assembly line at a sweltering glass factory, provides the context to appreciate the musician’s life as a reward unto itself.